Black dot is caused by the fungus Colletotrichum coccodes. The optimum temperature range for this fungus is from 25 to 30°C, which explains why it develops faster during hot summers.

The sources of contamination include plant waste from potatoes and tomatoes, as well as microsclerotia on the tubers.

Description of the symptoms on crops 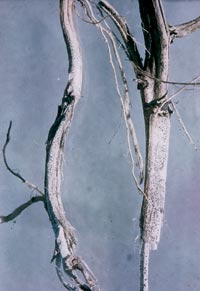 The symptoms on crops appear sporadically and appear above all during hot summers, causing yellowing, curling up and then drying of the stems.

At the end of growth, the underground parts of the plant show the following typical signs of attack : early destruction of the roots, detachment of the root envelope and formation of numerous large black holes (microsclerotia).

Description of the symptoms on tubers

Lesions can be seen on the tubers due to fungus attack : appearance of dull grey patches associated with formation of fruit bodies (silk-bearing microsclerotia) that are larger than in the case of Silver scurf (photo 3: on the left, small holes = Silver scurf conidiophores; on the right, large holes = black dot microsclerotia); in some cases, there are relatively clear sunken patches with rotting of the underlying tissue.

The economic advantage in controlling black dot remains to be demonstrated, but we can recommend limiting attacks of black dot by:

<< Back to the deseases page