The potato wart disease is a serious potato disease caused by a primitive fungus: Synchytrium endobioticum.

The spores released by the tumours can remain alive for many years (up to 30 years) in the soil, in encysted form.

The attacks are particularly severe in a cold and damp climate. 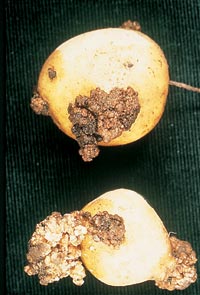 Tumours, due to cell proliferation, of variable size (from a few mm to the size of a fist), develop on:

Attacks are mainly below ground level, however, under very damp conditions, they can also be observed above ground.

Unlike powdery scab or root-knot nematodes, the tumours never form on the roots.

The tumours are initially whitish, turning black later on and releasing a black spore powder. The tumours can turn green if they are exposed to light.

The disease can develop during storage.