The agent causing bacterial wilt is the bacterium Ralstonia solanacearum (formerly called Pseudomonas or Burkholderia solanacearum). This bacterium is found in tropical to temperate regions worldwide as the optimum temperature for the strains is in the range 25-30° C.

The bacterium Ralstonia solanacearum can survive for several years in the soil and also remain alive on host plants belonging to the Nightshade family (tomato, nightshade, capsicum, aubergine, tobacco, etc.) as well as other plants.

The bacterium penetrates through the roots and is propagated by the vascular system; it is spread by irrigation water or by seed potatoes. 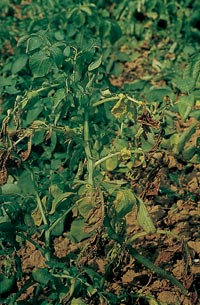 The symptoms are not always very apparent on crops. A rapid wilting may sometimes be noted while the foliage is still green, being more or less rapid according to the temperature and humidity. At the onset, the wilting is limited to hot periods during the day, but eventually becomes generalised.

In the case of a severe attack, a bacterial exsudate may ooze out when the stem is cut. 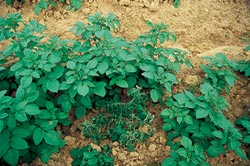 The expression of the disease on the tubers is characterised by the presence of a reddish brown colouration of the vascular tissues, visible when the tubers are cut. A beige rot turning to brown (hence the name of the disease) subsequently develops on the vascular ring. Splitting (and pressing) the tuber reveals a whitish bacterial exsudate on the vascular ring. This exsudate can ooze out at the eyes or at the base (or talon), and then becomes visible on the outside as it causes soil particles to adhere.

This is a particularly dangerous quarantine bacterium (no tolerance is accepted), for which there is no direct means of control.

Use of a certified seed potato, which has been field and laboratory checked, remains the best guarantee.