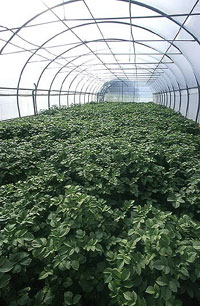 Built in 1978 at the initiative of seed potato growers and marketers, the Lavergne station is the focus of the potato breeding activities of GROCEP.

On the same site, GROCEP carries out laboratory production of starting material by in vitro culture and propagation of first-generation tubers in insect-proof glasshouses.

A new laboratory supplements the facilities by providing overall control of the health status (viruses, fungi and bacteria) of the bred and selected material.

A breeder and three technicians perform about 40 000 sowings per year using 400 crossings.

This team has the use of the following facilities:

Around six hectares are used for the propagation of selected material and the different trials needed for a good knowledge of its agronomic and technical qualities.

Multilocal trials are carried out in parallel at seven experimental sites located in the main potato production areas.

A scientific partnership is under way in the context of the ACVNPT which links GROCEP with the INRA potato breeding station at Ploudaniel.

Under an agreement between the INRA and the ACVNPT, improved genetic material will be made available that possesses resistance to various biological stresses.

The geographical location of the Lavergne station in the central southern part of France has naturally oriented the potato breeding towards varieties adapted to Southern Europe and the Mediterranean Basin.