Gangrene is a late blight of the tuber caused by the fungus Phoma exigua var. foveata (more aggressive) as well as P. exigua var. exigua.

The fungus remains alive in the soil as saprophytes. The contaminated soil adhering to the tuber is used for the propagation of the fungus, which penetrates through wounds made in the tuber during harvesting and conditioning.

The storage premises and the equipment can also represent sources of contamination.

Low temperatures immediately after harvesting or conditioning encourage the development of Phoma from wounds in the tubers, insofar as they slow the healing of these wounds.

Attacks on the crops often remain unnoticed, causing only premature yellowing of the foliage. Black pycnidium may appear at the base of the stems at the end of the crop or after haulm defoliation/desiccation. 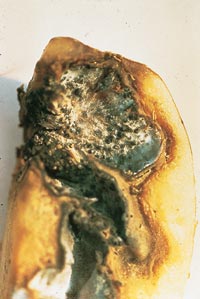 Dark depressed areas can be seen on the tubers giving rise to "thumbprint" patches which are generally located on the wounds, eyes, lenticles and stem-bases.

The cut surface of the tuber shows a dark-brown coloured late blight associated with the development of pycnidium in existing cavities.

The Phoma is a wound parasite, and the methods for control include the following measures: