The Potato Mop-Top virus is transmitted by a soil fungus, Spongospora subterranea, itself responsible for powdery scab on tubers or roots. The virus can remain alive for several years in the soil within the fungus conservation spores, or on the host-plants (Nightshades, Chenopodiacaea).

The fungus zoospores, released in cold and damp weather, act as carriers for the virus to penetrate the roots or tubers. The disease is frequent in northern Europe, in heavy or peaty soil.

The symptom-carrying seed only transmits the disease to 20 to 50% of the progeny and recontamination occurs above all via the soil or through earth moving activities. 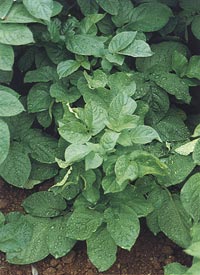 • On the foliage: the leaves at the base can show bright yellow blemishes, sometimes with curved or chevron patterns.

Sometimes light green bands or chevrons can be seen on the top leaves.

The most typical symptom is the shortening of the internodes on the top leaves giving a bushy appearance to the top of the plants.

• On tubers: presence of brown necroses, ring-shaped or in lines, more or less concentric, which often penetrate into the tuber's flesh almost without interruption, unlike the Tobacco Rattle virus. The symptoms are sometimes rather limited at harvesting and then evolve during storage. Development of the symptoms is favoured by substantial variations in temperature (e.g., refrigeration). On sensitive varieties, substantial necroses or deformations can occur.