The potato tuber necrotic ringspot disease (PTNRD) is caused by isolates particular to virus Y, designated as Yntn, which belong to the Yn sub-group.

The Yntn isolates can be transmitted in the same way as the other strains of the virus Y via the seed and the very numerous species of aphids. This disease is present in most European countries and is very widespread in areas with a warm climate such as central Europe and the Mediterranean basin.

Description of the symptoms on crops 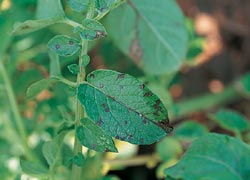 NTN isolates cause mosaics and crinkles of variable intensity on the leaves, similar to those caused by type Yo isolates.

When contamination occurs in the current year, other symptoms can be seen such as necrotic spots on the leaves or necroses on the veins (particularly visible on the upper side of the leaves).
Some more characteristic symptoms include: 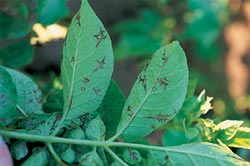 • necrotic threads on the stems and the petiolar or foliar necroses with an "oak leaf" shape. 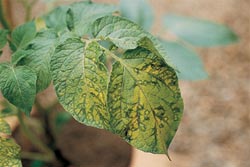 Description of the symptoms on tubers 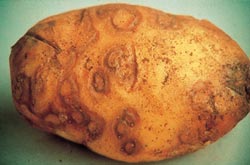 The disease is characterised by more or less dark brown bands, of variable shape, but often in the form of an arch or ring, appearing on the tuber surface at harvesting or at the beginning of the storage period.

The necrotic tissues then become depressed (picture on the left) and can even crack, but they are nevertheless restricted to the periderm.