Powdery scab is due to the fungus Spongospora subterranea which settles on the potato tubers.

Low temperatures and water are favourable factors to its development. This fungus can live for several years in the soil, but, in principle, contamination occurs through infected tubers.

Spongospora subterranea can also attack the roots and stolons.

This fungus can be an agent for the Potato Mop-top virus, which is responsible for internal necroses of the tuber.

Description of symptoms on roots 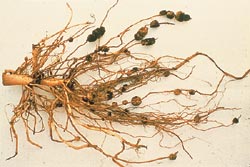 Formation of cankers on the roots, initially white and then turning brown at a later stage. 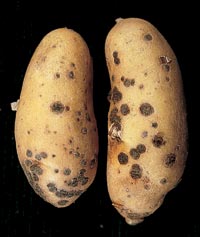 The fungus Spongospora subterranea settles under the skin of the tuber where it causes light-coloured blisters which take on a darker hue when mature. Afterwards, the blisters break to release a brownish powdery mass containing bags of spores. These latter symptoms of powdery scab correspond to a large number of small corky depressions on the tubers, surrounded by pieces of torn skin.

An examination of these bags of typical spores under the microscope allows the diagnosis to be confirmed.

Owing to the limited development of this disease in France, control principally consists in using healthy seed potatoes. In areas at risk, it involves using long periods of rotation (at least five years) and draining damp plots.

Fungicides are used to treat seed potatoes or soil in the countries concerned (Scotland, Scandinavia, etc.).