Silver scurf is due to the fungus Helminthosporium solani. This parasite can live in the soil for several months and is essentially transmitted by contaminated tubers.

Contamination occurs mainly in the field, but is also possible during storage.

Light silvery patches are clearly visible on the tuber in red-skinned varieties of potato. These patches spread and are covered with very fine black holes (= fungus fruiting bodies or conidiophores carry the spores). At harvesting, these symptoms are barely visible and appear above all during the storage period when the temperature and humidity are favourable.
The optimum temperature is around 20-25°C, but development can occur from 5°C.

Detachment of the skin enhances dehydration and wilting of the tubers.

The symptoms of Silver scurf and black dot are often confused, even if some criteria make it possible to differentiate between them: Silver scurf (left tuber) has more clearly defined blemishes, is more silvery and shows finer black holes than black dot (right tuber in photo 3). 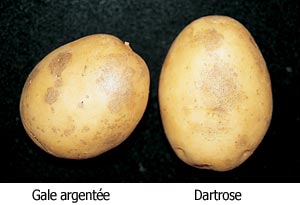 Various measures can restrict the spread of Silver scurf without, however, entirely preventing its development: