At present, we can distinguish two main groups of phytoplasms on the potato:

Phytoplasms, such as the Stolbur, are organisms of the mycoplasma type (or MLO), which are microorganisms close to bacteria but without a wall and which cannot be grown outside a living organism. Stolbur is classified as a quarantine parasite in the European Union.

The main carriers are insects of the leafhopper family (Macrosteles sp., Hyalestes sp.), but transmission is also possible via a parasitic plant : the dodder.

The disease is found in Central and in southern Europe, as well as the Middle East, the United States, Australia, Asia, etc. The disease develops slowly in cool and damp climates. 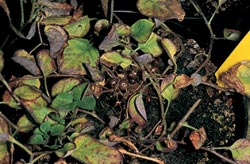 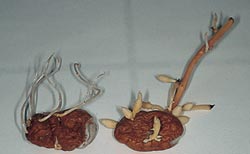 On the underground parts: