The Tobacco Rattle Virus is transmitted by stem and bulb ground nematodes, belonging to the genera Trichodorus and Paratrichodorus.

This virus is capable of infecting almost 400 cultivated seed potato species (Potato, Tobacco, Beetroot, Artichoke, etc.) or weeds (from Amaranths to Vetches including the black Nightshade, Chickweed, Knotweed, Bluegrass, etc.). It can therefore remain alive for many years in a contaminated plot.

The disease is very poorly transmitted by the potato seed in general and contamination essentially occurs through earth moving activities and transport of contaminated seeds.

Some viral strains cause symptoms on part of the foliage : deformed leaves, smaller, with light (almost yellow) blemishes and diffuse outlines. Arches or bands can sometimes be seen forming a yellow chevron pattern. 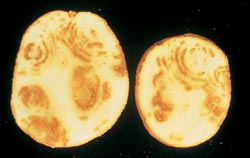 The tubers show blemishes (or curved patterns) that are corky brown in the tuber flesh, sometimes without any external symptom. These necrotic rings generally form a concentric pattern, but these are much less regular than those due to the Mop-Top virus.

External attacks are due to the brown necroses, quite often with ring-shaped or curved patterns. However, sometimes only swellings can be seen or, on the contrary, brown cracks on the skin. When cut, these external necroses generally continue into the tuber's flesh.

The Tobacco Rattle virus symptoms can be seen particularly well in cold weather and vary considerably depending on the viral strain, variety and humidity.

The Tobacco Rattle virus is essentially a soil disease and the rather limited methods for control include: