Two main species of fungus belonging to the genus Verticillium (Verticillium dahliae and V. alboatrum) are responsible for Verticilium wilt disease in potatoes.

Certain species persist on weeds, on plant remains or come from other crops.

The inoculum comes from the soil, irrigation or run-off waters.

The infection can occur through the roots, wounds or sprouts. 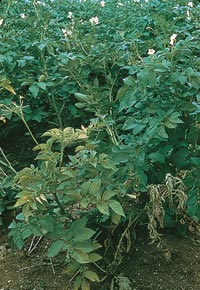 The symptoms appear late on the crops : the leaves at first turn yellow, followed by withering of the foliage then the whole plant. The withered leaves turn brown, fall or remain attached to the stem with remains green.

In some cases, the yellowing or withering may only affect one side of the leaf, stem or plant.

On cutting the base of the affected stems, a brownish colouration of the vessels can generally be observed.

Small black sclerotia or mycelium may be observed on the dead stems, depending on the species of fungus.

The affected tubers show brown blemishes on the vascular ring, which can evolve into cavities.

Verticilium wilt remains marginal in our climate, and alone does not justify the recommended methods for control which comprise: